Home » Node.js vs Java: What Should you Choose for Web Development in 2023? 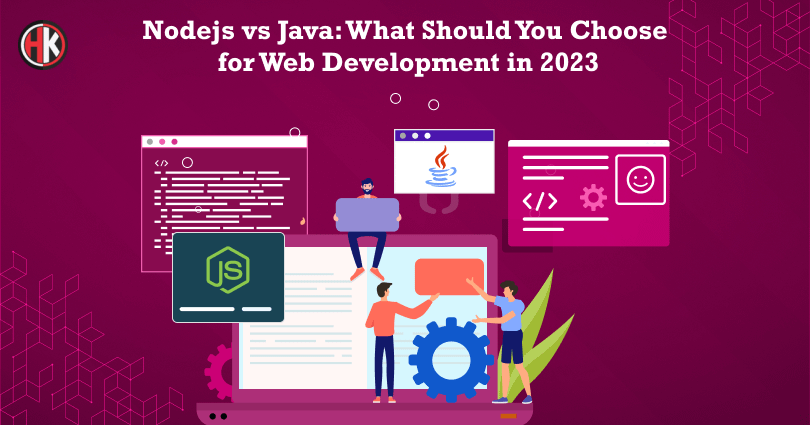 Node.js is unquestionably one of the most well-liked frameworks because it creates projects that are quick, cross-platform, and scalable. By encouraging startups around the world to choose it over numerous other technologies in 2023, it continues to stand out against the competitors in the market.

Because of this, Node.js continues to hold high level positions in the coding industry despite its 2009 debut.JavaScript is also still very important in the world of programming today. It might be primarily related to its catchphrase, “Write once, run anywhere.” In other words, this language’s popularity among programmers and developers is largely due to its platform independence.

JavaScript can be used to create complete web and mobile applications for various operating system servers.

As for the question of Node.js vs java :What you should choose for web development, let’s explore the main characteristics and also their benefits and drawbacks in greater detail so that you can decide for yourself.

Nodejs is an open source server programming environment created by Ryan Dahl in 2009.Programmers can create JavaScript on both the client and server sides using this open-source, cross-platform runtime environment.

It is a cross-platform programming language that runs on Windows, Linux, Unix, and macOS. Node.js executes a  JavaScript runtime environment code for the backend. It also continues to run on the V8 JavaScript Engine and implements Javascript outside a web browser. Today Nodejs  has 2450 contributors, 8.5 thousand votes on StackShare, and more than 61,000 stars on GitHub.

Also Read:- Django Vs Node.js: Which One is Better for Web Development

Pros and Cons of Node.js:

The main benefits of using Node.js for server-side programming are as follows:

JavaScript has established itself as the undisputed leader among popular programming languages. As a result, Node.js has established its reputation as a distinct brand in the industry. Node.js is utilized by 2.1 percent of all internet sites, or at least 30 million sites according to statistics.

When you choose Node.js for the backend, you get all the benefits of full-stack web development, such as:

As a result, your team is much more adaptable, and development takes less time, resulting in faster and more reliable software.

The technology is lightweight, which can significantly shorten the time required to have an app developed while maintaining functionality. You can quickly transition from app idea to product with Node.

Scalability is built into the foundation of Node.js. It’s one of Node’s fundamental advantages for startups that intend to grow over time. It is chosen by app-based startups to develop lightweight and quick systems with a good real-time response that can be expanded up eventually, while also being able to easily add more components to the existing ones.

The scalability of a node is achieved through load balancing and the ability to handle a large number of simultaneous connections. Furthermore, Node applications support both horizontal and vertical scaling.

Don’t be concerned about Node.js’s relative inexperience. In recent years, the number of businesses utilizing Node.js for their product offerings has skyrocketed, with industry titans such as PayPal, Netflix, and eBay jumping on board.

Without a doubt, Node.js is a fully grown and well-tested tool that will not be neglected or forgotten anytime soon.

Node.js doesn’t have many drawbacks, but businesses and startups should be aware of these pitfalls:

The “Green Team” at Sun Microsystems and James Gosling created Java, a general-purpose, class-based, object-oriented programming language, in 1991. Java’s key features include cross-platform compatibility, stability, and efficiency. One of the most widely used and well-known programming languages in the world is Java.

Pros and Cons of Java

Speaking of advantages, the following is a list of Java’s advantages:

Java is a Secure Language:

Because pointers can result in unapproved memory access, this is a potential threat. Java likewise utilized OOPs concepts such as summarization, abstraction, and inheritance to increase security and prevent unauthorized user access.

Java is Inexpensive and Simple to Maintain

Because of its simple design, Java is inexpensive and simple to maintain and develop. Java can operate on any technology, regardless of the system’s hardware, which significantly reduces development costs.

JavaScript programs written in one system can be operated  on any other computer that has java. Java compatibility is not dependent on the operating system or hardware, making it platform-independent and extremely flexible.

Java is a highly flexible language. This is due to the fact that Java is platform-independent and doesn’t require any special devices to run. As a result, Java is simply compatible with most every device.

Java is updated on a regular basis to fix bugs. As a result, Java is among the most sustainable programming languages available in the market. So most bugs are immediately removed via updates. Hence it is critical to keep Java up to date.

Despite the fact that the highly esteemed language has a long list of advantages and the added benefit of longevity, it has a few cons too:

Also Read:- How to Hire Dedicated Front-End Developers for your Next project in 2023

Node.js vs Java: What are the Main Differences?

Java uses compilers, which makes it slower than native languages. Contrarily, Node.js-based applications never buffer, allowing for faster runtime and chunked data output. And although Just-In-Time compilers might slightly boost Java’s performance, node.js comes out on top in terms of speed and performance.

Java and Node.js are total opposites with each other in terms of stability. Node.js is designed to be used in conjunction with APIs. Since APIs frequently change, apps created in this environment frequently experience stability problems. Java is renowned for its extremely stable interfaces because of its strict, tried-and-true structure.

Although the lack of internal scalability in Java can be remedied by integrating third-party programs like NCache, it does not currently have any (for distributed cache). Node.js’ event system enables servers to give a response in a non-blocking manner, which makes them highly scalable. Scalability is one of Node’s key characteristics.

Java development is cheaper in the US and Indian market. If you want to outsource your development or hire freelancers, you will encounter prices that vary largely.

Typically, it is difficult to pinpoint the exact cost because project complexity, strategic planning, drawbacks, as well as other factors all influence the estimates. But compared to Java, Nodejs has high cost of development .

Security is one of the most important things to consider while choosing the technology for web development. Node.js lacks in error handling or application failure. That is why it’s not too secure . In contrast, Java is extremely secure. There are no security problems other than those that might be caused by certain integrations.

Plenty of well brands from a variety of industries have chosen Node.js for their projects. Consider the following examples:

PayPal uses Node.js to construct the Web/API elements of the world’s largest online payment system. The application is twice as fast and has 33% fewer parts than before when it was using some other framework.

Netflix is yet another famous company that chose node.js. The full web-facing features were rebuilt in Node.js (mainly APIs). Because of Node.js, the world’s largest subscription-based streaming service saw a 70% reduction in startup time.

Uber’s main issue is its data – management capacity. As a result, the firm required a cross-platform technical solution that was extremely fast, scalable, and capable of handling massive volumes of alerts and requests. The company discovered that Node.js was the best option for building its vast matching system.

Various well brands from a variety of industries have chosen java script .js for their projects. Check the following examples:

Wikipedia is an encyclopedia made by the people, for the people. It runs on an open source software and it has a java powered search engine. Before 2014, wikipedia had a Lucene engine. But now it comes with Elasticsearch, which is a decentralized search engine written in Java.

Spotify is one of the most popular  audio music streaming services. It uses Java primarily for monitoring and strengthening data transit. Moreover, Java is the dominant technology that has been used in its mobile application.

Twitter is among the top 5 social medias used around the world. And it used to use rails for its front-end development. But since 2017, twitter has been using java for it’s API due to the scalability issues.

Also Read:- MEAN Stack vs MERN Stack: Which one is Better for Web Application Development

Which is the Best Technology:- Node.js or Java?

It is hard to say which technology is best between Node.js and Java as they both have their own set of pros and cons. But in a detailed comparison between them it’s clear that Node.js is better than Java.

For example, when it comes to performance node.js definitely has an upper hand. If we consider the cost aspect, both are similar although node.js is slightly more expensive than java. Node.js is known for its flexibility and speed of development, so in this consideration also Node.js wins.

In terms of stability, cost of development and scalability, however, Java is better. So the answer to the question “which is the best technology?”, depending on the  user requirements, the answer would be both.

For enterprise web apps, increased security, scalability, reliability, operational efficiencies, and maintenance and repair are obvious criteria. Businesses are always looking for the best way to put their ideas into action and improve the services they offer.

Choosing between Node.js and Java would be difficult until we consider the development requirements. Nodejs is always a good choice because it is significantly quicker and uses newer technology. As previously stated, it has a number of other advantages over Java.

Finding the best NodeJS developers, on the other hand, can be difficult. If you want the best node.js development services, Hire Node Js developers from Hackerkernel ,a well known IT startup for software and app development.

1.Where Should i go Node.js or JavaScript ?

In current trends going for Node.js would be a better option due its speed and performance. It is also easier to maintain as compared to JavaScript.

Node.js development has grown in popularity over the last four years and is expected to remain competitive in 2022, with startups around the world preferring it over other available options. So, yes there is a future for Node.js in 2023.

Due to its numerous advantages, node.js is being used by most  big companies. Due to this sharp increase in popularity, it might seem like it’s going to replace Java. Java on the other hand is a language that has been around for decades so it will not become obsolete.

4.Why Node Js is so popular?

Since V8 is the JavaScript execution engine, the significant move to integrate Node.js with V8 was a contributing factor to the popularity of Node.js. It also is faster and easier to learn so more developers are taking it up which also contributes to its popularity.

How to Hire a Dedicated Android Developer for your Project in 2023 Django Vs Node.js: Which One is Better for Web Development for Your Upcoming Projects Hire Dedicated PHP Developer for your Project in 2023: Process and Benefits How to Build a SAAS Application For your Business in 2023 – Step-By-Step Guide
0 0 votes
Article Rating
Subscribe
Login
1 Comment
Oldest
Newest Most Voted
Inline Feedbacks
View all comments
Dai Software