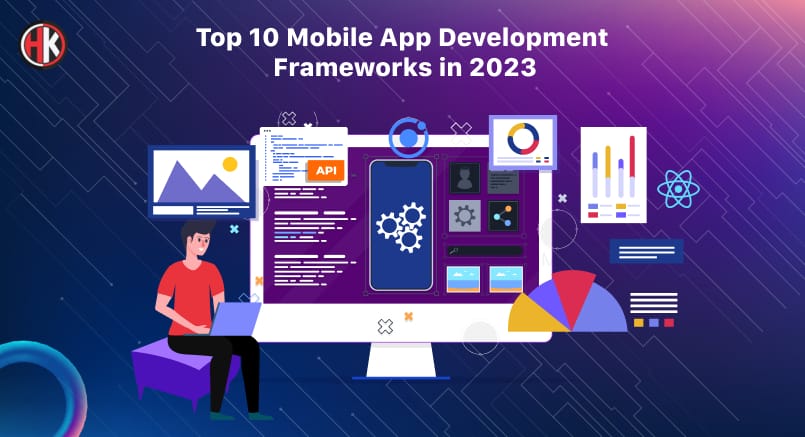 The mobile app development industry just keeps on growing with each passing year, majorly because there has been a heavy consumption of mobile devices that carry various exciting apps. But have you ever thought about how are these apps built and how can developers make them more efficient and effective?

What is a Mobile App Development Framework?

To make app development a simple, flexible, and fast process there are a variety of frameworks that help app developers to design an app according to a specific platform or environment.

A mobile app development framework is basically a set of tools and services that create a fundamental structure for the development of the app. The library of these frameworks not only makes the creation of applications simple but also accelerates this process.

And efficient developers make the best use of their app development tools like emulators, code editors, debuggers, etc to build such frameworks.

There are different frameworks that are used to built the various mobile app such as Native ,Hybrid and Cross platform.

App development is a booming industry where chances of success are high. However, with the development of a wide variety and a large number of apps every day, businesses must ensure the fast development of high-functioning apps.

And this is possible through numerous mobile app development frameworks available in the market today like ionic, angular, and xamarian that can boost up the entire process.

Another major benefit of mobile app development frameworks is that they can enable developers to create more polished and professional apps. In fact, the right framework can make the app look and feel like a standard native app which gives the client a competitive edge and success rates.

To make an app reliable and trendy it must have an accurate combination of features along with an appealing user interface that engages the audience. A perfect framework can avoid unnecessary pitfalls and build an app with intact code. This will build an app that is not only user-friendly but also consistent, reliable, and trendy.

Good quality frameworks make the apps flexible by ensuring that they are platform friendly. These quality frameworks provide specific standards to enable porting the app on different platforms. Such frameworks like ionic and Cordova allows built-in components according to the latest market trends. Trends that increase client satisfaction to an optimum.

Perfect mobile app development frameworks offer pre-built components according to the latest tech market practices. This designs your app in such a way that the client’s needs and specifications are met just according to their target audience.

This set of frameworks builds a strong and secure network for the functioning of the app by ensuring non-invasive cyber crimes.

Also Read:- Django Vs Node.js: Which One is Better for Web Development

Ionic is a fast, reliable, and performant framework that makes it easy to build performance apps. Ionic is built on top of Angular, one of the most popular and powerful web and mobile app frameworks. Not only this it also provides a wide range of UI components, tools, and services to make app development fast and easy.

The Ionic Framework is an open-source UI toolkit for building high-functioning, good-quality mobile and desktop apps using web technologies (HTML, CSS, and JavaScript). This framework is used by some of the world’s largest companies, small businesses, and individual developers all over the world.

The best applications built with ionic frameworks are some of our very favorite and frequently used apps like Netflix, Hulu, Amazon Prime, and iTunes. Another example of an app with the ionic framework is eRealto a real estate application with scalability and CRM solutions to cater to our client’s needs. Hire an ionic developer for strong & fast performing business operations and building the high quality app.

React Native for iOS is a popular framework for developing iOS applications using React Native. It is easy to use and provides a consistent development experience across different iOS devices. The best examples of apps built with react native frameworks are Facebook and WhatsApp —that widely used apps in the world today.

Also Read :- React Native vs Flutter: Which One is Better for Mobile App Development

This framework is known for its high performance and fast development cycle. And additionally, it provides a wide range of features and libraries that make app development easier and more fun.

Lastly, Flutter is based on the Dart programming language and uses the Skia graphics library along with applications that are compiled into native code and can be deployed to any platform. It also provides a rich set of Material Design and Cupertino (iOS) widgets and APIs for building beautiful and responsive user interfaces.

Various mobile apps are built with the flutter framework some of which are google ads, Reflectly, KlasterMe, and the Physiotimes app by HackerKernel which is all about the knowledge and techniques of physiotherapy.

Read More:- MEAN Stack vs MERN Stack: Which one is Better for Application Development

There are many different frameworks available for developing applications using Apache Cordova. Some of the most popular ones include Ionic, PhoneGap, and jQuery Mobile. Each of these frameworks has its own unique set of features and benefits.

The applications of this framework are compiled into native code, which makes them fast and responsive. Titanium also provides a variety of plugins and extensions that allow developers to extend the functionality of their applications.

Titanium provides a set of SDK tools and APIs that allow developers to access native device features and functionality, such as the camera, geolocation, and accelerometer.

Titanium apps can be built for multiple platforms, including iOS, Android, and Windows, and can be published to app stores as native apps. Titanium is a popular choice for mobile app development, as it offers a fast and efficient way to create native and cross platform application.

Sencha Ext Js Framework is one of the most popular JavaScript frameworks that is used for developing web and mobile applications. It is a complete framework that provides a rich set of components, templates, and tools to help you create responsive, modern web applications.

Sencha Ext JS is also one of the few frameworks that provide a true cross-platform & hybrid app solution, allowing you to develop for both desktop and mobile devices.  The sencha built apps such as portaldemo and imageviewer.

Xamarin is a mobile app development framework that enables developers to create cross-platform mobile apps with native user interfaces. With Xamarin, developers can share up to 90% of their code across platforms, making it an efficient way to create apps for multiple platforms. Xamarin also has a robust community and ecosystem, with plenty of resources and support available for developers.

PhoneGap is a popular open-source framework for building mobile apps using HTML, CSS, and JavaScript. The framework allows developers to create apps for a variety of platforms, including iOS, Android, and Windows Phone by using a single codebase.

The main advantage of using PhoneGap is that it saves developers a lot of time and effort when creating apps for multiple platforms. Instead of having to create separate codebases for each platform, developers can simply create one codebase using HTML, CSS, and JavaScript, and then use PhoneGap to compile it for each platform.

PhoneGap also offers a number of features and plugins that make it easy to add native functionality to your apps, such as access to the device’s camera, GPS, file system, and more.

Onsen UI is a front-end framework for developing hybrid mobile applications using HTML5, CSS, and JavaScript. It is designed to provide a native look and feel for your app, while also providing a robust set of features and tools to help you develop your app quickly and efficiently.

Onsen UI is built on top of the popular AngularJS framework and offers a wide variety of UI components and features to help you build your app. In addition, Onsen UI also provides a number of tools and services to help you test and deploy your app.

Overall, Onsen UI frameworks is a great choice for developing Hybrid mobile apps. It is easy to use and provides a wide variety of features and tools to help you get the most out of your app development.

Also Read:- How to Hire a Dedicated Full-Stack Developer

Mobile Angular UI is a mobile UI app development framework that allows developers to create native-looking mobile applications using AngularJS. The framework includes a number of UI components that are designed to work well on mobile devices, including switches, navbars, and carousels.

Some examples of the mobile angular UI can be seen in AWS mobile with google dart and the N2Express app which is an international payment app. This app can be checked out at Hackerkernel a renowned IT and software development company.

Nowadays, a great number of startups and software development companies have already gotten involved in the mobile app development industry. However, creating a mobile app is not an easy task, especially when it comes to creating a complex app.

Therefore to make tricky app development process easy and quick today there are several mobile app frameworks in the market that not only set the foundation of an app but also professionally design the app according to the preferences of the client. With the development of technologies and the need for more and more efficient applications, the list of the top mobile app development frameworks has increased.

If you are hunting for an app development company that can build strong apps for your business which is backed by even stranger and the latest frameworks then let’s end your search here.

Hackerkernel is an IT & software development company that bridges the gap between ambitious clients and dedicated developers. If you want to get a customized app made that is portable, flexible, affordable, and secure then Hackerkernel is all set to offer top-notch services.

A cross-platform framework is a type of software development framework that allows code to be written once and then deployed across multiple platforms. This can be particularly useful for businesses that want to develop apps for multiple platforms without having to maintain separate code bases for each one.

There are a number of different frameworks that can be used for cross-platform app development. Some of the more popular ones include React Native, Ionic, and Flutter. Each of these frameworks has its own advantages and disadvantages, so it’s important to choose the one that’s right for your specific project.

There are many different options for stack when it comes to android app development. However, some stacks are better suited for specific tasks than others. For example, the React Native stack is a good choice for developing native apps that need to be fast and responsive.

There is no single most used mobile app development framework – different developers prefer different frameworks based on needs and preferences. However, some of the most popular frameworks used for developing mobile apps include React Native, Ionic, and Flutter.

How to Hire a Dedicated Android Developer for your Project in 2023 Django Vs Node.js: Which One is Better for Web Development for Your Upcoming Projects Hire Dedicated PHP Developer for your Project in 2023: Process and Benefits Why ERP is Important for any Business or Organization?
0 0 votes
Article Rating
Subscribe
Login
1 Comment
Oldest
Newest Most Voted
Inline Feedbacks
View all comments
Dai Software